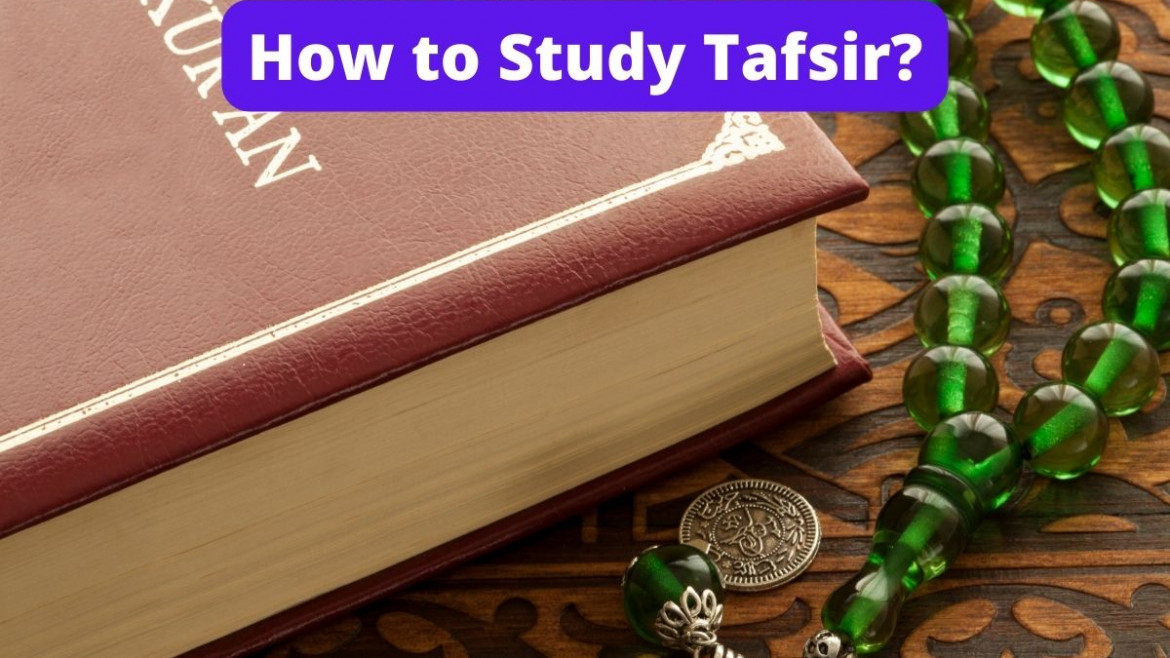 Learning the Quran and understanding its words is every Muslim main goal, so in this article, we will discover the best ways to study tafsir.

Allah revealed the holy Quran to us to guide us through the way and to walk on the right path. As Allah said in the Holy Quran:

“Verily this Quran guides to the Way that is the Straight most. To those who believe in it, and do righteous works, it gives the good news that a great reward awaits them. (Al-Isra: 9)

The Arabic word tafsir or Tafseer means interpretation or explanation. It also comes from the Arabic word Fassara which means to clarify or explain. Now, what does the Quran tafsir means? It means to explain the meaning of the Quranic verses without making any mistakes in the Arabic syntax, grammar, literature, and Quranic sciences.

To be able to explain the Quranic verses one must be aware of when the verse was revealed and why. The word tafsir was mentioned in the Holy Quran in the following verse:

“And they do not come to you with an example [i.e., argument] except that We bring you the truth and the best explanation”. (Al-Furqan: 33)

Studying the tafsir of the Quran is not an easy task, that needs a lot of time and commitment. Having a basic knowledge of Islam doesn’t mean that it will make it easy for you to learn Tafseer. To learn it easily you should have a strong knowledge of the Islamic history and religion.

How to study Tafsir?

In the past, the tafsir of the Quran came from the understanding of the verses of the Quran itself, the interpretation of the prophet (peace and blessing be upon him), then from their own understanding. That’s how it was in the past and how it still is until now.

1-     Studying tafsir through the holy Quran:

The first step is to study tafsir from the Quran itself, it is the most effective method. This method follows the explanation of one verse that refers to another verse. Let’s take an example to make it easier to understand, the answer to the question will Allah forgive the person who committed the sin of polytheism or not, the following verse answers the question:

“Surely Allah does not forgive that a partner is ascribed to Him, although He forgives any other sins for whomever He wills. He who associates anyone with Allah in His divinity has indeed forged a mighty lie and committed a grave sin. (An-Nisa: 48)

However, another verse tells us that Allah will forgive the idol worshippers if they sincerely repent before dying. Here it is:

“Say (This is addressed to the Prophet), “O My bondmen who have been extravagant against themselves, (i.e., who have committed sins) do not feel despondent of the mercy of Allah! Surely Allah forgives guilty (deeds) altogether; surely, He, Ever He, is The Ever-Forgiving, The Ever-Merciful. (Az-Zumar: 53)

The other method to study tafsir is through sunnah. You can look for what the prophet (peace and blessing be upon him) said about the verse. For example, Allah says in the Holy Quran:

“…and eat and drink until the white thread of the dawn becomes distinct from the black thread; then complete the fast up to the night…” (Al-Baqarah: 187)

The prophet (peace and blessing be upon him) gave the following tafsir as narrated by Adi bin Hatim: ‘I said, “O Allah’s Messenger (PBUH)! What is the meaning of the white thread distinct from the black thread? Are these two threads?”

He said, “You are not intelligent if you watch the two threads.” He then added, “No, it is the darkness of the night and the whiteness of the day. [Sahih Al-Bukhari]

This is what the prophet’s companions used to do to understand the Quran. They used to ask the Prophet (peace and blessing be upon him) questions related to Quran and the prophet gave them the explanation they needed.

3-     The third method to learn tafsir is through Aathaar:

What Aathaar means is the sayings of the prophet’s companions. They depend on the Quran itself first and if they had any problems understanding something they would go ask the prophet (peace and blessing be upon him), then they would rely on their own understanding.

4-     Through understanding the Arabic Language

Another way to learn tafsir is through understanding the grammar, and syntax of the language. but keep in mind that sometimes the literal meaning of a word doesn’t apply to the actual meaning of the Quranic verse.

The Arabic language changed a lot with time and the vocabulary lost its true meaning that’s why you can’t say that the literal meaning of the word can always apply when studying tafsir.

So, this is another method that you could use besides the other methods.

In the end to understand and learn the tafsir or as some call it Tafseer you can do so through four methods.

1-     Through Quran: this method follows the explanation of one verse that refers to another verse.

2-     Through Sunnah: by understanding the sayings of the prophet (peace and blessing be upon him). As the companions used to ask the prophet about what they don’t understand and the prophet gave them the tafsir and clarification they needed.

4-      The final method is through understanding the Arabic language but keep in mind that sometimes the literal meaning doesn’t apply.

Now if you still have any questions in mind visit our website muslimtutorspot.com. You can also check out our complete guide to find Quran classes online here. And, of course, feel free to reach out to us with any questions you may have, we would love to help!

How to Find Online Quran Classes for Beginners?