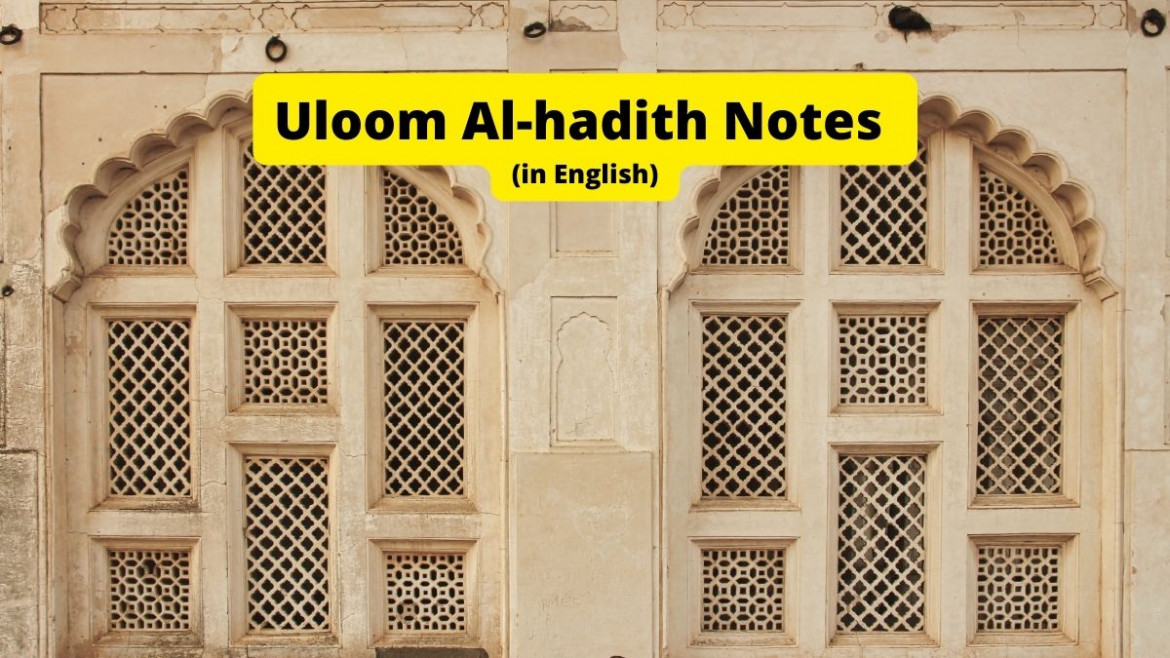 In this article, we will learn all you need to know about Uloom ul-hadith notes, and its curriculum, so keep reading if you want to know the answer.

Uloom ul hadith is known as the “Foundation of Prophetic Traditions”, in this field a learner will study hadiths classification, terminology, and interpretation.

Studying this field will help you know which hadiths are weak/fabricated and which are authentic. Most of the fabricated or weak hadiths cause conflicts within the Umah, that’s why it’s important to learn this science.

Ulum al-Hadith is a big science that requires years and years of study and reading, but in order to make it easier for you, here is a curriculum that you can study on your own.

Before we get to Uloom ul hadith notes in English, let’s discuss some definitions.

Matn: The actual text of the hadeeth.

Raawi: Raawi is one of the narrators in the chain of narration. The word Raawi means

Sanad: It refers to the chain of narrators of a particular hadith.

Hadeeth Saheeh: It is the higher grade for the sanad and the matn. It means sound and

correct. Its plural is sihaah.

Hadeeth Hasan: It is a good grade hadith that is slightly less than Saheeh. The plural is

Hadeeth Da’eef: It is a low-grade hadith that means there is a significant weakness in the

chain or in the text of the hadeeth. The plural of da’eef is di’aaf.

Hadeeth Mawdoo’: This means that proof is available to show that the hadeeth is

fabricated or has untrue narration. Its plural is mawdoo’aat.

2- The difference between weak hadith and Saheeh hadith:

Saheeh hadith is the authentic hadiths, here are the conditions that must be fulfilled:

While weak hadiths are the ones that don’t fulfill the above conditions.

How to study Ulum al-Hadith?

Here are books that you can read before you start the elementary Ulum al-Hadith curriculum:

How to study Ulum al-Hadith at the Elementary level?

The purpose of this stage is to acquire major knowledge of the hadith literature, sciences, nomenclature, and prophetic narrations.

You could start by reading hadith books and the Studies in Hadith Methodology and Literature. For example, you can read the revised Malaysian edition by Mustafa al-A’zami and then read the book Hadith Literature by Muhammad Zubayr Siddiqi.

When you finish those two books you can read Introduction to the Sciences of Hadith by Suhaib Hasan it’s a brief book in English. Also, you can read is al-Manhal al-Latif by Muhammad b. ‘Alawi al-Maliki, Taysir Mustalah al-Hadith by Mahmud al-Tahan, Ibn al-Mulaqqin’s Tadhkirah. Also, there is a clear book called al-Wadih fi Mustalah al-Hadith by shaykh ‘Abd al-‘Aziz al-Shaya’.

Also, read the Textbook of Hadith Studies by Hashim Kamali. You are now ready to study the meaning of each hadith, to do so read memorizing al-Arba’un by Imam al-Nawawi then read Jami’ al-‘Ulum Wa al-Hikam by Ibn Rajab.

Other books to read in Ulum al-hadith:

How to study Ulum al-Hadith at an Advanced level?

In this stage, you want to read the major hadith works with commentary and takhrij, in addition to acquiring knowledge of the main features of ‘ilm al-rijal, and al-jarh wa al-ta’dil. And also to know how to respond to any criticisms regarding ulum al-hadith.

Here is a collection of books in Ulum al-hadith:

To know how to respond when someone criticizes Ulum al-hadith, here is a popular book that will help you. al-Sunnah wa Makanatiha by Mustafa al-Siba‘i, al-Sunnah al-Mutahirah wa al-Tahadiyat by Nur al-Din ‘Itr.

Also, you could learn from:

How to study at the Mastery level:

Other contemporary authors that you could read their books include:

Obsessively read the Sahihayn, devoting a period each day for their study so that one can complete reading them in a year. One should aim at a minimum to do this over four years.

Here are the sahih narrations:

If you want to memorize the hadiths then these books will be of great help:

Also, read commentaries on the hadith collections start with easier ones including:

While studying the hadith keep Ibn al-Athir’s Al-Nihayah fi Gharib al-Hadith with you to find the meaning of the words you don’t know.

At the beginning of learning Ulum al-hadith one should begin with the following:

Also while reading the Muqadimah you should read the following Takhrij work to understand how the theory of mustalah is applied:

Now, if you still have a question don’t hesitate, go ahead and visit our website muslimtutorspot.com