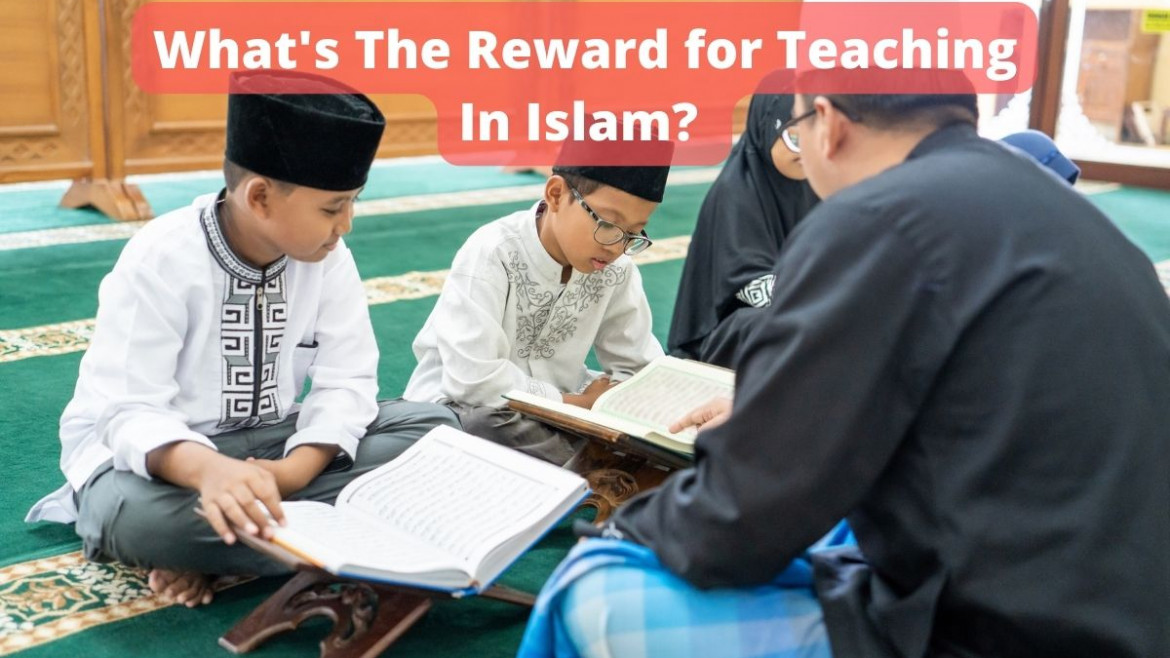 Teaching what you know to others is a good deed that never fades away, imagine teaching someone to read Quran, whenever that person reads Quran you will be rewarded. But is this the only reward for teaching in Islam?

Teaching others and sharing your knowledge with them is something that all Muslims are instructed to do.

The teacher is the one that has the power in his hands to build generations. Imagine being the person that guides children toward learning and desire to gain more knowledge. Teach in a way that make children love learning, teach with love and care, that’s how teachers should be.

We have only mentioned one virtues of teaching in Islam so let’s see the many other rewards.

What are the Virtues of Teaching in Islam?

Let’s learn about the reward for teachers in Islam.

1- The best of you are people who study the Qur’an and teach it:

Imam Al-Bukhari narrated that the prophet peace and blessing be upon him once said:

“The best of you are people who study the Qur’an and teach it.”

And the prophet also said:

“Surely the most important people among you are those who study the Qur’an and teach it.”

Also, Abdul Humaidi Al-Hamani, said: “I asked Sufyan Ath-Thauri, which one do you prefer, the person who fights or the person who reads the Qur’an?” Sufyan replied: “Reading the Qur’an. Because the Prophet said, the best person among you is someone who studies the Qur’an and teaches it.”

2- one of the rewards of teaching in Islam is to become a Special Person:

Al-Bukhari narrated about the status of the teacher in Islam,

3- You will get a reward like the reward of the person who did it:

The prophet (peace and blessing be upon him) also said:

“Whoever points to the good, then he will get a reward like the reward of the person who did it.”

Abu Hurairah narrated that the prophet said(peace and blessing be upon him):

“Whoever becomes a pioneer of good deeds then is practiced by people afterward, then it will be recorded for him the rewards such as the rewards of those who follow him and in no way will reduce the rewards they receive.

On the contrary, whoever becomes the pioneer of an ugliness practice then is practiced by the person afterward; it will be recorded for him a sin such as the sin of the person who follows it, without reducing his sin in the slightest.”

4- Spread your knowledge to be saved from the hellfire:

The prophet said: “Whoever is asked about science and then hides it, then on the Day of Resurrection, Allah will restrain it with the bridle of hell.” [Abu Dawud and Imam Tirmidhi]

5- In IslamTeaching others is a Sunnah:

The prophet said: “Indeed Allah, His Angels, and all the inhabitants of heaven and Earth including ants in their holes and fish, really all pray for good for those who teach humans.”

“Whoever points to the good, then he will get a reward like the reward of the person who did it.”

Allah instructed us to teach others what we know and to not hide our knowledge. Allah said in the Quran:

7- there are many rewards for teaching in Islam:

There is also a hadith stating that:

“Anyone who studies one chapter from a science and then teaches it to others, then for him is given the same reward as seventy siddiq people.”

8- Allah love who teach his knowledge to others:

The prophet (peace and blessing be upon him) said to his companions: “May Allah’s love always be devoted to my successors (the caliphs).” One of his companions asked: “Who are your successors, O Messenger of Allah?” He replied: “Those who revive my Sunnah and teach it to servants of God.”

9- Teaching your knowledge is an everlasting deed:

Prophet Muhammad (peace and blessing be upon him) said:

“If a descendant of Adam (man) dies, then all his deeds are cut off, except for three cases; one of the three is … useful knowledge.”

10- The best reward for Teaching in Islam: Go to Heaven:

Prophet Muhammad (peace and blessing be upon him) said about the rewards of teaching in Islam:

“When the Day of Judgment comes, then Allah says to those who like to worship and those who jihad: “Enter you into heaven.” Said the scholars: “With the excess knowledge that You have given us, then your servants can worship and jihad in your way.” So Allah ‘Azza Wa Jalla said: “You are with me like my angels, give syafa’at, you will get syafa’at.” Then they gave syafa’at, and they too enter heaven.”

What are the Rewards for Teaching Good Deeds to Others?

Oqbah ibn ‘Amr Al-Ansari narrated that the prophet (peace and blessing be upon him)said:

“Whoever guides someone to virtue will be rewarded equivalent to him who practices that good action” [Saheeh Muslim].

Guiding others to do good deeds will get you rewarded not just for teaching it but also for every time the person you taught work with it. You will be rewarded just like doer. That is one of the rights of teachers in Islam.

There is also another hadith stating that teaching others to do good deeds will grant you rewards just like the one who does it.

“I have none with me.” A man said, ‘O Messenger of Allah, I can guide him to someone who will provide him with a riding beast.’ Upon that the prophet said: “The one who guides to something good has a reward similar to that of its doer.”

“It points out the virtue of guiding others to good deeds, paying attention to them, and helping them. It also states the virtue of teaching knowledge and acts of worship, especially to those who act upon them from the devoted worshipers and others. “A reward similar to that of its doer” means that he will be rewarded for this deed just as its doer will be rewarded for it. This does not necessitate that their reward should be equal.”

“And cooperate in righteousness and piety, but do not cooperate in sin and aggression. And fear Allah; indeed, Allah is severe in penalty.”

Teaching others and guiding them to good deeds will have us rewarded, at the same time guiding others to sins and bad deeds will increase the once sins.

It is narrated that Jareer ibn ‘Abdullaah said that some bedouins came to the Messenger of Allah (peace and blessing be upon him) wearing woolen garments.

He saw that they were in a bad state and desperately in need, so he urged the people to give them charity. The people were very slow to respond, and it could be seen on his face. Then a man of the Ansaar brought a package of silver, then another came, and another and another, and the Prophet’s (peace and blessing be upon him) face was filled with joy.

Upon that the Messenger of Allah said:

Now after all has been said, there is only one thing left, no matter what your age is don’t stop learning. Our duty as Muslims and humans is to seek to acquire more knowledge.

And if you are searching for a specific course or you feel lost don’t worry, visit our website muslimtutorspot and find what interests you. There is all kind of courses for you to choose from, so go ahead and find what suits you.

How to Teach Quran to Beginners?  A Complete Guide

How Do I Get My Child To Like The Quran? Tips That Always Work